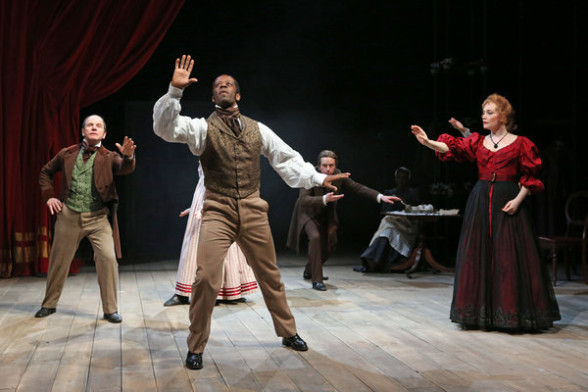 In 1833, when noted British actor Edmund Kean fell ill before a performance of “Othello”, his emergency replacement turned out to be a young man of limited reputation named Ira Aldridge, who was not only someone that few of Kean’s castmates had ever heard of, not only a Yankee, or American, from New York, but was also, much to nearly everybody’s shock and dismay…black.

Lolita Chakrabarti’s “Red Velvet”, a slightly fictionalized account of actual events–and playing for the first time here in America following a successful run in London–is about the turmoil within the company in the days following Aldridge’s arrival, as some of his new comrades support him and others oppose him, often quite vehemently.

In addition to the unbridled hysteria (and there’s a lot of it, particularly in the first scene, after he’s arrived, and one at the end, when Aldridge trades blows, verbal and otherwise, with the company’s manager), there is also a welcome dose of comedy, much of it involving the stark contrast between the American’s style of acting and the laughable, far more presentational style of the Brits. (Compared to the others, the naturalistic Aldridge might as well be channeling Brando.)

Adrian Lester plays Aldridge with a blustery bitterness (he is the aging and angry central figure in a pair of dressing room scenes that open and close the play), and, alternately, a bright-eyed determination to leave his mark, coupled with an endearing, self-effacing sense of humor.  Among the standouts in the supporting cast are Oliver Ryan as his early nemesis, Kean’s son, the shaken and hopping-mad Charles; Eugene O’Hare as the beleaguered company manager, Pierre, whose explosive confrontation with Aldridge is the climax of the play; and Charlotte Lucas as Ellen Tree, Aldridge’s Desdemona, the most sensible and supportive of the lot, a woman willing to accept the newcomer for the savior he is, and not (as most of the others view him) a threat.

Indhu Rubasingham directs with a deft hand, moving the cast about the large stage with precision and switching easily from the Bard to Chakrabarti and back again, and Tom Piper’s set, comprised of little more than a couple of chairs, a dressing table, a divan and a door, all of it carried on and off by the actors themselves, is simple yet efficient.

As for the liberties that Chakrabarti may have taken with history–it hardly matters.  “Red Velvet” is a powerful piece of theatre.

It should not be missed.

(NOTE: “Red Velvet” is playing at St. Ann’s Warehouse in Brooklyn through April 20.)