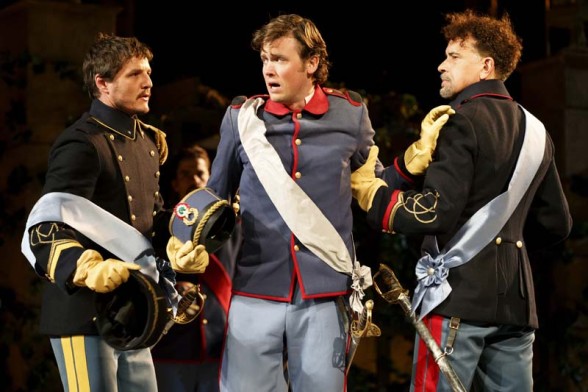 Hamish Linklater and Lily Rabe star in the Public Theatre’s Much Ado About Nothing, the first Shakespeare in the Park production of the summer.

Linklater is Benedick, a soldier returning from battle; when he reunites with Beatrice, niece of Leonato–into whose home he’s been welcomed–their past feelings for each other are rekindled.  Unfortunately, they’re a stubborn pair of fools, loathe to admit what’s in their hearts.  She claims to abhor love; so does he.  He speaks disdainfully of marriage; so does she.  When her uncle (and others) see them once again lobbing insults at each other (their favorite pastime and primary means of communication) they decide to trick them into believing that each is achingly, desperately, in love with the other.

.
Meanwhile, Benedick’s friend and fellow soldier, Claudio–who is hopelessly in love with Leonato’s daughter Hero–is hoodwinked by the malicious Don John into believing that Hero, far from the virtuous innocent he has always thought her to be, is in reality deceitful, unfaithful, and quite possibly bedding down half the men in town.  This leads to some heated confrontations that contrast neatly with all the merry mischief and comic wordplay.
.
Rabe, a veteran of these Delacorte Theatre productions, is, as usual, wonderful,  displaying vigor and venom in equal measure, particularly in her scenes with Linklater; and Linklater himself–also no stranger to Shakespeare in the Park–gives as good as he gets, with a richness of voice and clarity of speech that matches hers every step of the way.  Indeed, the entire cast delivers its lines with the utmost precision–and musical theatre vet Brian Stokes Mitchell, as Don Pedro, not only gets to fill the theatre with that booming baritone of his, but he even gets to sing!
.
Director Jack O’Brien keeps the verbal jousting and physical antics coming from all angles, and also knows exactly when to ratchet up the drama: John Glover’s fiery speech as Leonato, upon hearing that his beloved daughter is not so innocent after all, is almost jarringly effective, and–one of the highlights of the evening.
.
John Lee Beatty’s set–with its outdoor patio, merest suggestion of a garden, ivy-covered fence and small, leafy trees–is masterfully rendered, and the costumes by Jane Greenwood (O’Brien has shifted the action to Sicily, circa 1900) are first-rate.  Even the pre-show fluff, featuring a smattering of cast members jabbering and quarreling in rapid-fire Italian, is a treat.
.
Robust, romantic, and often riotously funny, there is much to like about this “Much Ado”.  It’s a fine way to spend a midsummer’s–or even early summer’s–evening.
.
THEATRE REVIEW by Stuart R. Brynien