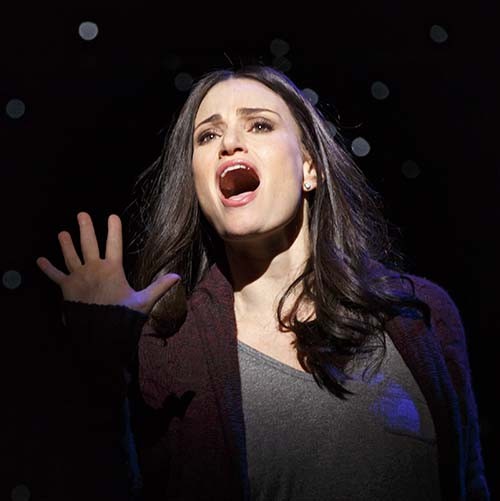 If/Then takes a theoretical question “If I take one path, then what will happen” and turns it into a musical about starting over after a divorce in the 21st Idina Menzel plays Elizabeth (conveniently separated into Liz and Beth for her two personas). The musical opens with a cryptic phone call and then brings us back to Washington Square Park where she is set to meet up with friends after moving back to New York from Arizona. Will she go to a protest with her college boyfriend Lucas ? Or will she hang out in the park with her new friend Kate listening to a cute guitar player? If she goes to the protest, she answers a phone call and receives a job offer working for the city (she’s an urban planner). If she stays in the park she meets Josh.

The rest of the show whirls by with two separate versions of Elizabeth’s life—one focused on her new career working for the city, the other focused on her new relationship with Josh, a surgeon who has just come back from his second tour of Afghanistan. She doesn’t get very far with her career, but she has learned how to trust the possibility of love again.

Written by Tom Kitt and Brian Yorkey, the creators of Pulitzer Prize- and Tony winning musical Next to Normal, If/Then looks at the complications of urban living and how decision making affects the lives that we create (or the lives that create us). The cast is uniformly strong, Menzel effectively plays both versions of her character and her supporting cast flurries around her, playing the different versions of themselves in the two halves of the play.

Michael Grief, who directed by Menzel and Anthony Rapp in Rent, borrows from his own wheelhouse, using scaffolding to create a stage picture that feels essentially New York, but also allows the play’s layers to unpeel, but the choreography feels like an afterthought and doesn’t seem necessary to the show on a whole. What’s essential to the piece are the narrative questions, but also the answers that the two sides of Elizabeth’s life answers. Can she be satisfied with just work, or just family? And while it overly simplifies this question, it remains dramatically compelling throughout.

If there’s a problem with If/Then, it’s that it tries to be both naturalistic and follow a standard musical arc and it ultimately doesn’t entirely succeed in melding the two together. Liz and Beth come across too many obstacles for the story to seem believable, but a believable version of her story wouldn’t be interesting to watch for three hours.