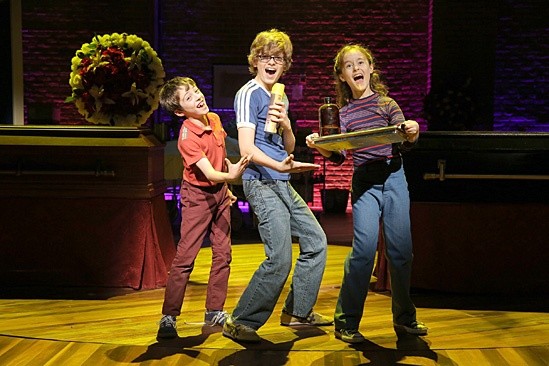 For those who are frustrated with the influx of musicals based on mediocre movies and superheroes, Fun Home at the Public Theatre is a welcome addition to the new musical scene.

Based on Allison Bechdel’s 2006 autobiographical graphic novel Fun Home, the musical tells the story of Bechdel’s complicated relationship with her father, Bruce. Bruce Bechdel is an aesthete, a high school teacher and a funeral home director (the Fun Home is the family nickname for the Bechdel funeral home). He takes an immense amount of pride in his old Victorian house in Pennsylvania and the family is expected to act the same way. When Bruce dies at the age of 44, Allison goes back to explore his life and how it’s intertwined with her own life and her understanding of her sexuality. The musical works as if a puzzle being carefully put together.

Allison is represented onstage by three actresses, Beth Malone plays Allison (the adult narrator), Alexandra Socha plays “Medium Allison” and Sydney Lucas plays “Small Allison.” All three actresses capture the spirit of the graphic novel and the audience sees Allison’s sexual awakening through these three versions of her. Allison’s story is so full of strange coincidences and connections to literature and understanding, that the subject matter and the source material are difficult to imagine adapting for the stage. Lisa Kron and Jeanine Tesori do an admirable job of adapting the story while incorporating some aspects of the delightful pages of the graphic novel. The music is complicated and gorgeous, the book is funny, but not quite as witty or oblique as Bechdel’s own telling of the story.

Michael Cerveris’ portrayal of Bruce is heartbreaking. His Bruce is more sympathetic than the Bruce of the graphic novel and his songs in particular are stunning. Judy Kuhn, as his long-suffering wife Helen, does a good job with an underdeveloped part (stay tuned for the musical of Bechdel’s Are You My Mother?…). The young actors who make up the kids in the Bechdel story are fantastic, their Partridge family-like fantasies are entertaining and imbue the world of the show with a sense of time and place.

Sam Gold’s staging, however, seems haphazard and incohesive. In the first section of the play, the set rotates around a space that includes the Bechdel house, the funeral home, Allison’s drafting table and her dorm room at Oberlin. The seamless transitions work and the musical moves quickly in this section. But the next two sections of the play are hindered by the use of a curtain and projections that feel like an afterthought.

Ultimately, the graphic novel serves as a better medium for Bechdel’s story, because her voice is so unique and her drawings are incredibly detailed. But if this musical leads audience members to discover her work, it’s serving a purpose.