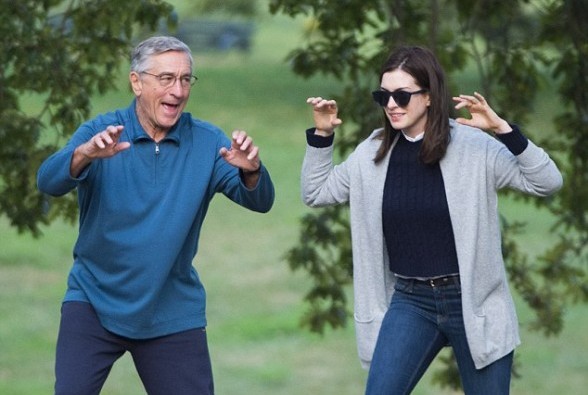 Who wouldn’t want a well-prepared, honest intern who looks and acts like Robert De Niro?

Nancy Meyers’ The Intern opens with Robert himself, as Brooklyn retired widower Ben Whittaker, explaining why he wants to apply for a position in a “Senior Intern Program.” He’d been trying to fill his days with myriad activities and feels it’s time for a change. “I just know there’s a hole in my life, and I need to fill it.”

Ben is no-nonsense on an even keel, and methodical. Jules is quirky, frantic, and overworked. When he shows up for his first day of work, Jules has absolutely zero idea of what to do with him. Ben’s internship happens to coincide with a challenging period in the growth of Jules’ company. The company’s investors, while delighted with its success, want to bring in an outside CEO. Jules dutifully interviews candidates, even as she’s dizzied by the notion that she could be effectively ousted from her own creation.

At the same time, she’s got a family at home — her husband, a stay-at-home-dad, and an adorable young daughter — and they feel neglected.

Through all of this, Ben maintains a careful, empathetic watch on Jules’ business and family. When he steps in to offer his help, bringing his experience as a businessman to bear on Jules’ own enterprise, it’s in the spirit of sharing his knowledge and experience, rather than that of correction.

Over the course of her successful Hollywood career, Meyers has hired name actors of a certain age. In this case, her use of De Niro is extraordinarily successful.  She harnesses the innate charm of her performers and creates milieus in which we enjoy spending time with them. For most of its running time, The Intern thrives on De Niro’s amiability and Hathaway’s sweet energy.

Meyers has made a movie about male-female friendship — about two people who come to really like each other, without making love. Jules admires Ben’s old-fashioned work ethic and positive attitude; Ben admires Jules for her toughness and business sense, as would a father.

De Niro’s character here is one that he’s pretty much never played during what many consider his acting heyday: a decent, straightforward, non-neurotic regular guy, who’s made good in life. And in this movie, he plays it with great sensitivity and warmth.

Hathaway has often appeared quite studied in her past glossy comedies, but here, juggling her work and family responsibilities; she gives a more relaxed performance, even when playing high-strung.

The lack of comedic goals allows Meyers to write and write, although her characterizations and plot sometimes seem designed to prove a point rather than to tell a story.

The Intern is a deeply felt, heartwarming movie about friendship, careers, marriage, as well as a visual love letter to the most livable of historic Brooklyn neighborhoods. The audience may find its messages inspiring, particularly the reminders to believe in yourself. You’re never too old to keep an open mind and never too young to learn from those who’ve come before you. 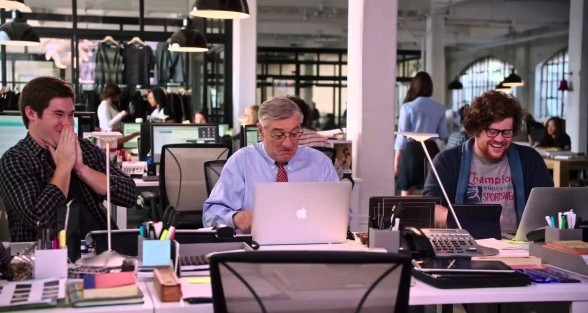 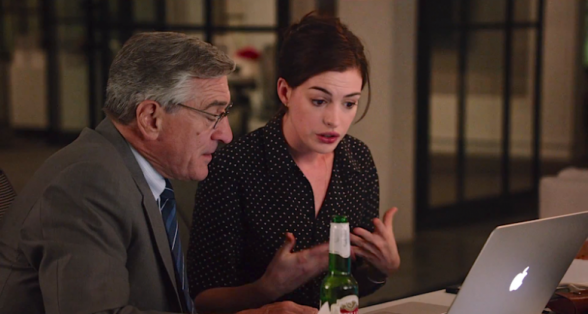