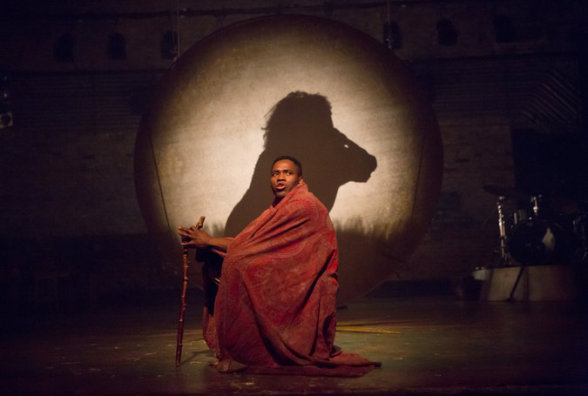 Complicite’s Lionboy, the inventive 30-year old British theater company’s newest import to the New York stage, is a play for young audiences about Charlie Ashanti, a British boy in search of his kidnapped scientist parents. Lionboy is adapted from the trilogy of the same name by Zizou Corder, though it takes certain liberties with the plot of the books to make the play more stageable.

Charlie arrives home one day to discover that his parents are missing and that there’s a note from his mother telling him to go over to a neighbor’s house. He’s been taught from a young age, “In Nullius verba” which is roughly translated as “take nobody’s word for it” (and is the motto of the Royal Society), so he doesn’t trust that the note is from his mother. His parents are scientists, seeking a cure for asthma (Charlie has asthma — in this world of the future a lot of people seem to  have asthma) and he wonders if they’ve been taken for a reason. His neighbor Rafi comes by, telling him that he should stay with him, but again, Charlie doesn’t trust him. He escapes without Rafi knowing and makes his way to the sea. Though Charlie is alone, he is helped by his ability to “speak Cat.” Rafi follows him because he’s actually an employee of the Corporacy, a multinational pharmaceutical company that doesn’t like the work that Charlie’s parents are doing (the Chief Executive of the Corporacy makes for a very 21st century, very British villain). The cats of London help Charlie escape Rafi, and once out to sea, headed to France, he finds himself captured by some circus performers. Charlie’s ability to speak to cats brings him closer to the lions on board the ship, but it also earns him the distrust of the lion trainer. He endeavors to get the lions back to their homeland of Morocco and also learns that the Corporacy’s headquarters is there and they’re holding his parents captive.

Complicite’s signature use of movement and creative use of props and puppetry are put to good effect in this production, but in comparison to their other work, the show seems a little small and a little on the nose. The actors, most of whom have worked with the company for many years, do a wonderful job of playing multiple roles, seamlessly weaving in and out of the ensemble to portray cats (both French and British, there is a difference!), circus performers, and other important characters. Despite a coherent aesthetic there are a few moments of confusion (a metaphorical boxing match doesn’t quite pack the right punch and the big pharma plot seems overly didactic for a TYA show), but the play successfully engages younger audience members who are encouraged to participate throughout the play and at least at the show I attended, were very vocal and very enthusiastic.