Lucas Eller: Hello, Lorenzo. Firstly I’d like to thank you for giving me this interview. And secondly, my first question: where were you born and raised?

Lorenzo Pozzan: I was born in Venice, raised in Rome, and then went to college in Padua, between Venice and Verona.

Lucas: How did you end up going to the University of Padua?

Lorenzo: It’s one of the most ancient and prestigious universities in Italy, that is why I chose it. And also because of what I wanted to study, which had to do with science and the environment, and Padua is the most advanced school in the matter,.in my country. Also, my dad is from that part of the country, so it was convenient for me: I lived in his apartment for the first year of college, then got my own. Exciting stuff for me, I was 18.

Lucas: 18? That’s brave. You said science and environment, right? Nothing to do with theatre?

Lorenzo: At the same time I attended an (evening) theatre conservatory for three years. I was very busy studying, that’s all I did, but it was worth it.

Lucas: Tell me a bit more about your life in Venice. You were born there and lived there up to what age?

Lorenzo: I was born there, and moved to Rome very young. And then later on I could spend some time there touring with a show. Venice is a fascinating city, it’s so beautiful, it almost looks surreal. When you walk into it, it feels like you’re walking into a dream.

Lorenzo: The island has about 55,000 residents, and they look so different from almost everyone else in the world. They’re pretty unique. And so is the city, with no cars driving, and a small population, which has been shrinking because of how difficult it is to live in Venice. Which is kind of sad, because you have this beautiful city where everybody wants to spend time, but hardly anyone wants to live. My dad told me thirty years ago its population was about twice that of today.

Lucas: Your English is very good — I’d rather say excellent — for someone born and raised in a foreign country, especially when you compare well-known actors whose accent was/has been pretty thick, such as Antonio Banderas, Penelope Cruz and Arnold Schwarzenegger. How do you manage to speak English with an American accent so well?

Lorenzo: For an actor, it’s very important to “sound real”, because it’s my goal to work in American theater, film and television. So fluency and speech have always been aspects I pay great attention to. I was very lucky my amazing parents sent me to schools where I learned three languages simultaneously from a very young age: English, French and Italian. So I received a double academic upbringing, in Italian and American schools until high school, and took French as a second language in both. Also, I’m very sociable and communicative, so I’ve always been able to practice those languages with native speakers, friends I’ve made and kept all through my life.

Lucas: Before we talk about your moving to New York, let me ask you about Rome. At what age did you move there?

Lorenzo: After I was born, I moved to New York with my parents for a year and a half. And when I was about two, I moved to Rome, where I lived until age 18; that’s two thirds of my life.

Lucas: Do your parents and sister still live there?

Lorenzo: My parents still do, but my sister actually moved to Venice, where she’s going to school.

Lucas: Then you moved to New York. How? When? Why?

Lorenzo: Well, New York has always been a dream, and became reality in my thoughts after I’d worked in Milan and managed to save some money. I moved here right after finishing college. Why? Because I guess it’s what one could define as one of the greatest cities in the world, and in the imagination of a young man like myself, it’s the right place to be, especially if you want to get into the theatre world and learn a lot. Of course there are many other fantastic cities, London, Paris, even Rome itself, and many more. But New York for the theatre and Los Angeles for the film industry ideally remain capitals of the world.

Lucas: Have you been happy living here so far?

Lorenzo: I’ve been grateful and happy with the city, the people I’ve met have helped make it an even better place for me. I also love the resources, the incredible amount of art, theater, different cultures, different life experiences that have made New York a unique city.

Lucas: It’s so funny I’ve heard this several times, and because I’ve lived in New York for over a decade I know it for a fact: people here have been almost always more than just nice, they’ve been amazing to me. Do you feel that way too?

Lorenzo: I totally agree with you. I guess when some say New Yorkers aren’t nice people, what they really want to say is that New Yorkers are very busy people, committed to their own lifestyles, which basically means running around always in a rush. This is just a very fast-moving city.

Lucas: You did some modeling?

Lorenzo: Yes, I did, in Rome and Milan. 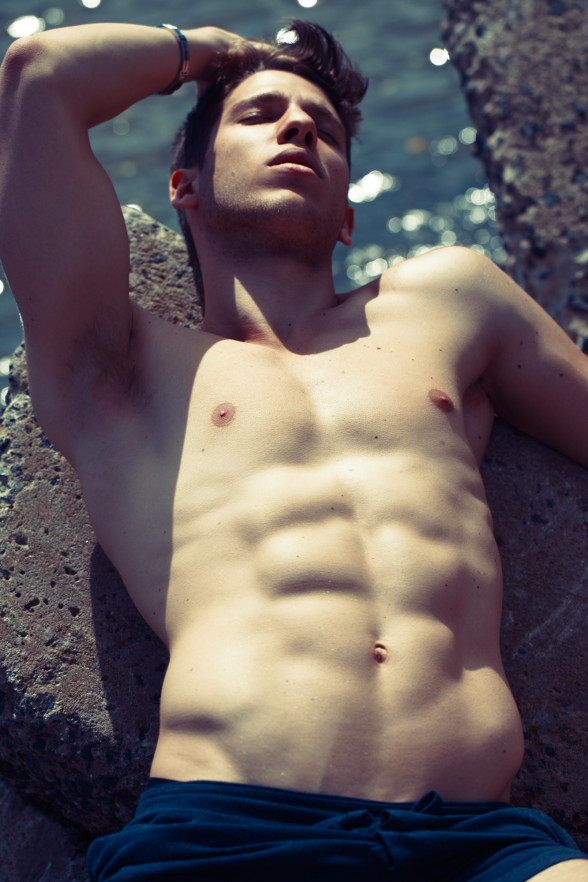 Lorenzo: I was taken to my first agency when I was 17, but only got to work when I was 18, because I was shy, and also I could be legally responsible for myself. I didn’t want to bother my parents about my modeling before 18, because they were very concerned with my education, and wanted to make sure I would stay focused.

Lucas: Did you do Paris too?

Lorenzo: I did some projects in Paris, but it was difficult to fit a lot of Paris work in, because I was busy going to school in Italy.

Lucas: Are you going to school here in the city?

Lucas: What’s your goal, acting for stage or film?

Lorenzo: I love both. There are some differences, of course. I love the stage for some reasons, and the screen for other reasons. To me it’s like the difference between good cake and good candies for somebody who loves sweets.

Lucas: You recently acted in a short film called “Just One Kiss”. Tell me a bit about it.

Lorenzo: It was a short film for a contest called the 24 Hour Film Race, in 2012. It was a lot of fun, we had to write, cast, shoot, edit and get it finished within 24 hours. It was a fun experience, even though I had to be awake and working non-stop for 24 hours.

Lucas: Again, thank you so much for taking your time for this great interview. We in New York City are always pleased to welcome young talent to our city, and will be happy to see you acting on our stages and big screens.